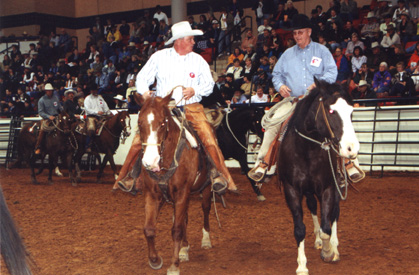 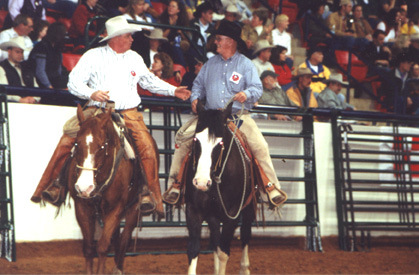 Jack can be seen in the video/DVD of the clinic riding in the horsemanship session on a black horse with white markings.

We got to the Stockyards Friday morning early. This was where everyone was keeping their horses. A lot of clinicians and people were gathering there and getting directions to the arena. After drinking some coffee and hanging around for awhile, everyone started for the Will Rogers arena. Most of Friday was spent just meeting and visiting with other clinicians and people that had gotten into town early. This was probably some of the most enjoyable time spent at the benefit. There didn't seem to be many egos showing up, and we sure got a lot of visiting done in a short time.

Saturday began with the colt starting. There were 4 roundpens set up with 10 colts and 10 people that had drawn out of a hat for horses to start. This was a real interesting part of the program because you got to see these people work individually and under a certain amount of pressure. Some drew easier colts then the others, but it's possible that they just looked easier because of the skills with which they were handled. It was like any colt starting, some humped up a little, some grabbed their butts and some just walked off like they'd been saddled every day. Some of the pens of clinicians worked together and got a lot accomplished in a hurry with a minimum of commotion, and some pens kind of had 10 people and 10 horses all going in different directions. These pens took a little longer to get much accomplished with their horses.

One pen in particular had their horses caught, saddled, rode and put away before some people had their horses caught. In this pen, Bryan Neubert was flagging the other riders off of his colt after he'd ridden him about 3 circles each direction. A few (maybe 2 or 3) got bucked off or had a colt wad up with them a little, but it wasn't bad for as much commotion as was going on. The most interesting thing to me was the levels of horsemanship that were displayed. The lowest level was awful good, but there were certainly some levels of horsemanship that were several notches above the lower ones. It was kind of like Shaq is a fantastic basketball player but Michael Jordan can REALLY play basketball. A lot of comments have been made about who did what & who did this, but it's pretty hard to judge what was going on down there unless you had a hold of that colt in that situation. Most of those comments were made by people that didn't have a hold of these colts under these conditions. It's pretty easy to be a good hand from the stands.

After lunch we had horsemanship. Some people brought their own horses, but a lot of us were riding horses that we'd never seen before. Incidentally the horses had never seen us before either. Ray Hunt just basically conducted a clinic with a bunch of clinicians doing the riding. It was pretty crowded the first day with 40 horses and riders in that small of an arena. I think that it was real good for the audience to see that the people riding have the same problems as the people in the audience do when they ride in a clinic. It's just that some of the riders in this clinic had more experience and were a little further along in their development.. In my case, I'd been on this horse for about 30 minutes before the clinic started, so it wasn't like I'd brought my best bridle horse from home. Most of the others were in the same boat as I was. We all made some mistakes and we all actually did something nice and soft once in awhile. Showed people that we were not all born with a pair of chinks on.

Sunday they started right out in the colt starting with most of the riders saddling up in the arena and a few in the roundpen. Billy Van Norman had a real soft little colt and he just saddled her, stepped on, scratched her a little and rode over and talked to Carolyn. All this time the horse just had the nicest softest look in her eye like she was glad to be there in Texas with him. Some of the colts were a little muscle sore from the day before and were a little touchier, and some that were touchy the day before were pretty quiet on the second day. The riders just did what they thought was necessary, got a little ride on their colts and put them up. Some rode in the roundpen a little before they took them out in the arena and rode them. Buck Brannaman and Rick Cornwall both had real sensitive colts the first day and both colts made a big improvement the second day. A couple of the colts wadded up and took a jump or two with their riders, but not much more then you’d expect from any 40 colts that were being started. I think two guys got bucked off, but I might be wrong, I wasn’t keeping score. A lot of the riders did a little more ground work with their colts after they had ridden them and before they put them up. It was a good demonstration of what can be accomplished if someone just runs 40 head of horses at 40 head of cowboys while about 1400 people were watching. Most of these colts looked like they weren’t even housebroke before the first day. It was tough circumstances for both the horse and the rider and I’m glad I didn’t have the responsibility to the horse of doing a good job in that situation.

Ray did a lot of demonstrations for the crowd and talked to them a lot before we went to the Stockyard for the group picture. He did a nice job with his horse. For any of you that have never done a clinic, one of the toughest things on your horse is to demonstrate things over and over for a bunch of people. Ray and the horse had a job to do and I thought they came through it real well.

After the group picture, we started the horsemanship classes. They were broke into two groups of about 20 riders and rode in two sessions. The first thing Ray told us was to try and ride like Tom was there watching. (If you want to try something someday, get out in front of about 1400 people and try riding like Tom Dorrance was watching you.) This gave everyone more room and allowed Ray to ask everyone to do a little more than the day before. We could even lope a little and we did a lot of transitions up and down. He had us do a lot of moving the hind quarters over a quarter of a turn and then move the front end over a quarter of a turn. This format was a lot better for both the riders and the audience.

Probably the highlight of the whole weekend for me was to meet the other people, whether they were a clinician, a clinician’s wife, or a spectator. I was introduced to this stuff in the 60’s when there was only a handful of us working at it and people thought we were a little crazy. It was awesome to be someplace where there was about 1500 people of a like mind about a horse. I met people from all over the US, Canada, Australia, New Zealand, Switzerland, a couple from Sweden, and someone from the Netherlands. It was overwhelming to just be a part of such an event.

I didn’t feel worthy of going to such a gathering. I had some friends, a brother and a wife that had to almost kick my butt to get me to attend. I still don’t feel worthy of being there, but by gosh, I’m sure glad I went. It was an experience of a lifetime.